Just before my thirteenth birthday, I took the plunge and asked my mum for a mascara. For a second it felt like I was the protagonist in a Judy Blume book, like Rachel Robinson or Margaret, that girl who talked to god all the time. Are you there, mum? It’s me, your daughter. I’m sick of being the only Plain Jane in a room full of mini-adults who used to look like my classmates. I need to join in.

My mum tried to understand – she delivered, with a silver, plastic mascara tube from the Avon catalogue. I was over the moon, and spent the rest of the year showing off spider lashes and waking up to pillowcases with little black marks on them.

It wasn’t the first time I’d asked for this sort of thing, but it was the first time I’d been taken seriously. While putting together a list for Santa when I was 5 or 6, I’d boldly requested ‘MAY CUP’. My teacher wondered what in god’s name a may cup actually was. Maybe some new-fangled toy I’d taken a shine to in Woolworths (RIP). “May cup!” I insisted, confused, until the penny dropped. My list was promptly changed:

‘May cup’ sounded nicer to me, like a month of yellow petals and Barbies and bright lips. I didn’t like the other version: two dull, everyday words that had absolutely no right to be placed next to each other and said to represent all of the magical shades I longed for. May cup was exciting and experimental and I wanted to own a pink, plastic dressing table stuffed with it. It wasn’t make-up. Santa would know what I meant.

By 15 I’d forgotten all about my Christmas list and was wearing make-up every day. It was no longer colourful and inspiring – it was something I required, like a toothbrush, and there was no way in HELL I’d have left the house without it. My parents couldn’t understand my angst at the idea of being asked to “quickly pop to the shops for some bread” on a Saturday morning. It took me just over two hours to get ready (three if I had time), which meant JUST POPPING OUT was never an option. I had eyeliner to apply, and if it wasn’t just right it was all wrong. One time I answered the door to my then-boyfriend, having just got out of the shower – and when I saw who it was, I felt sick. I quickly put my contact lenses in, scribbled some black circles around my puffy eyes and prayed this day would never be mentioned again.

Ten years have passed since then, and I’m a lot better at going to buy bread. On a daily basis I’m sticking with cat-eyes and moisturiser and a bit of powder here and there. My skin’s clearer and my mornings are a lot less stressful, and I’m even able to leave the house on a Saturday or Sunday WITHOUT ANY MAKE-UP ON. My local Sainsbury’s knows me only as fresh-faced Sophie, who mysteriously owns a Nectar card but looks about 13. The newsagent at the end of the road wonders why I am buying Grazia and not the Beano, BUT IT’S OKAY.

Why is it okay? Because I’m not mentally hitting myself around the face for having the audacity to exit my house without warpaint – I’m no longer feeling quite so fervently that I owe anyone anything when it comes to how I look. A few weeks ago I read this and felt like a slab of concrete had been lifted from a rucksack I’d been wearing for years: 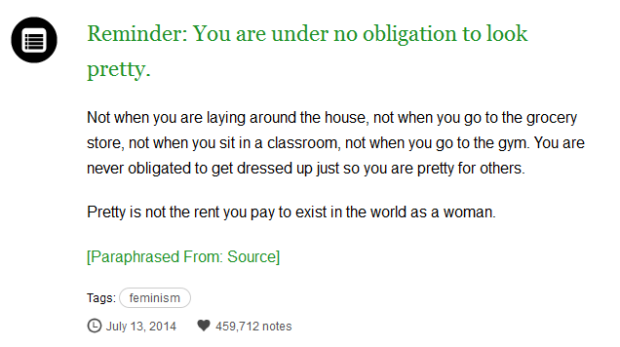 Pretty is not the rent you pay to exist in the world as a woman. AKA make-up is optional. AKA it’s okay to leave the house sporting jogging bottoms and unwashed hair. AKA you can walk around the shops on a Saturday with a clean, natural face and not have to apologise for it. That one sentence is now stored in my list of mental pick-me-ups and I try to remember it wherever I go. I wish I’d seen it when I was 15.

The most important thing for me now is the knowledge that I have a choice. ‘Pretty’ doesn’t have to be the default every day. If I want to get up and go, that’s okay. There is one face in the world that belongs to me, and I can do whatever I like with it. And if I want to spend four hours on my appearance instead, that’s good too. Some people do. Some of my favourite people to watch are the ones who still view make-up in the same way I did when I was 5. It makes them excited, not anxious. Their palettes are like rainbows and their faces are paintings and I love them for the way they treat it all like a luxury, like an exotic chocolate box full of colours, not a sad necessity to make boys happy.

I’m sitting here writing this with a clean but make-up-free face. My eyes are a little smaller but they’re still my eyes. I can rub them when they itch and not wind up with a dirty fingernail. A man just came round to check our boiler and I didn’t want to hide when he rang the doorbell. My skin feels like it’s on holiday. I’m going out later and I’ll brave the city centre as I am.