Did you like From First to Last? Did you learn HTML? Did you watch Donnie Darko just so you could add it to the Movie section of your MySpace profile? Join the club and reminicise. PC4PC, anyone? (Yes, that is me posing with a plastic bird above. I can’t explain.)

1) You used to stand with your feet pointing inwards

2) You had at least one friend in a band

Going to a gig and knowing the person on stage was great – you’d walk around the venue (normally a village hall or a city pub) feeling like your own children were about to perform. “Did you know I’m best friends with the drummer?” you’d say (lol what a lie), while scoping the place out to see if ANDREWANARCHY© was attending that evening.

Or MISS MURDER™ if she wanted to be REALLY cool. Before that album, AFI was a punk band for older kids that you’d never really listened to. After that album, AFI was moved to the top of your Music section on MySpace. Until three months later, when the fad had worn off and you never listened to them ever again. Sorry, Davey.

Actually REFERRING TO YOURSELF AS EMO simply wasn’t done. Shudder. You know when people call themselves hipsters because they’re wearing a pair of 3D cinema glasses with the lenses poked out? It was on a par with that.

5) You knew Skrillex before he was Skrillex

We struggle TO THIS DAY to be close friends with people who don’t remember these images. They are too important to not be discussed. Back in 2005 we listened to Ride the Wings of Pestilence non-stop and wrote Note to Self lyrics on our hands in English classes. From time to time, we wonder if Sonny still speaks to Emily.

6) You got into HTML for a bit and overused &this;

It never occurred to you that this minor social media-enhancing skill might come in handy in future job roles, but occasionally it does and you feel very proud of all the times you edited your profile instead of revising for your GCSEs. HOW’D YOU LIKE ME NOW, MOM? &smug;

Neon yellow tutus? Stripey socks? Please. We would not have accepted your friend request. (Actually, we would, because we wanted to reach the big 1K and weren’t quite desperate enough to join one of those whore trains. Plus we didn’t really get what they were.)

8) Seeing this was the biggest dopamine rush of all time 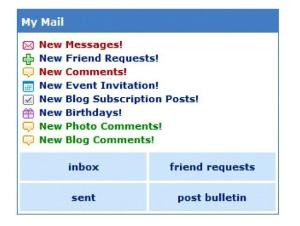 Sometimes you wonder if you’ll ever feel the same kind of anticipation again. MySpace was pre-smart phones, pre-laptops in everyone’s bedroom (unless you were really lucky or really rich). When you logged in for your allotted few hours of MSN-and-social-media and saw those notifications, you knew you were in for some fun. NEW BLOG COMMENTS? BUT THAT NEVER HAPPENS!

Hi! My name’s Sophie (Sophie Jo, if you like, but some people don’t because it reminds them of someone who goes line dancing and wears cowboy boots). View more posts